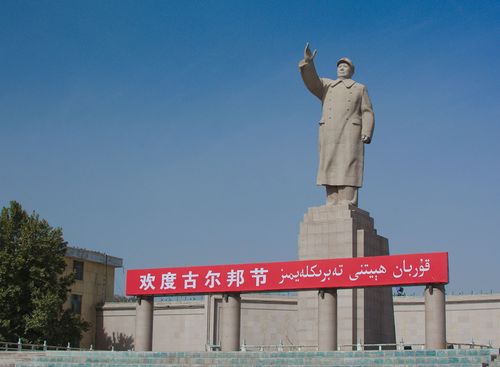 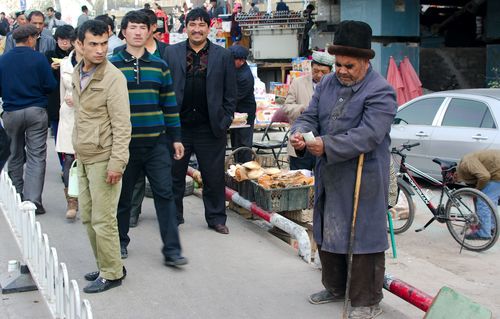 → www.flickr.com
After the tiring and irritating experience of entering China, Kashgar was the comfortable urban withdrawal we had dreamt of. Plenty of modern amenities in the form of a large supermarket in walking distance, choice of food and even a huge underground electronics market, where i was able to repair the damaged cable of my Petzl headlamp, Daniela bought a harddisk for backing up images and i found a very cheap interim tripod(The head of my Manfrotto had broken when it had been tipped over by the wind at Ak-Baytal pass in Tajikistan). 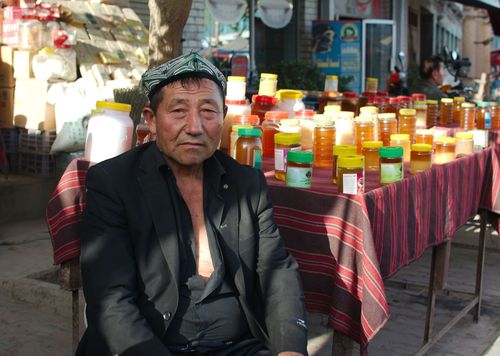 → www.flickr.com
Honey merchant
Most impressing though was the huge amount of electric scooters everyone was using. In conjunction with three meter wide "cycleroads" running along both sides of all major roads it seemed very modern, even futuristic. The scooters are travelling quietly at 20-30 km/h, which made it easy for us to glide along on the wide cyclepaths. 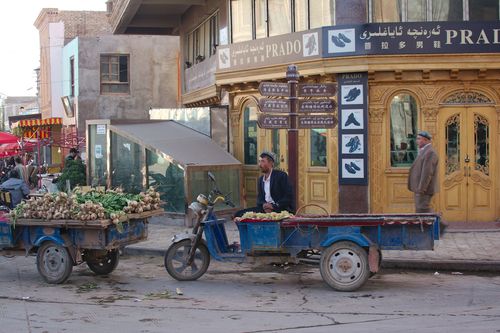 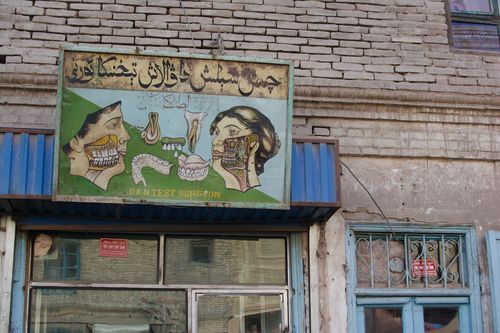 → www.flickr.com
The nightly food market offered a large variety of stuff - not too much that met our dietary habits(Freshly prepared Laghman the most obvious), but there was plenty of interesting stuff to see - sheeps head, hooves and thick layers of fat gobled down with delight by uigur men, skewers with eggs, mushrooms, tofu, mutton and unidentified bits boiling in a unbearably hot chilly soup, mountains of chickpeas and huge, half fileted fish. 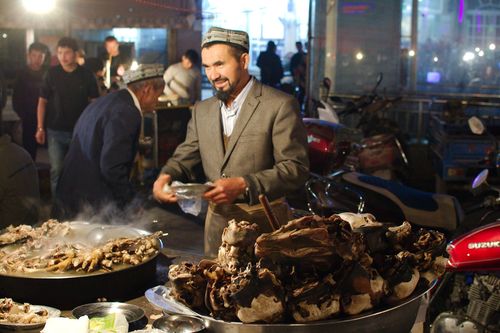 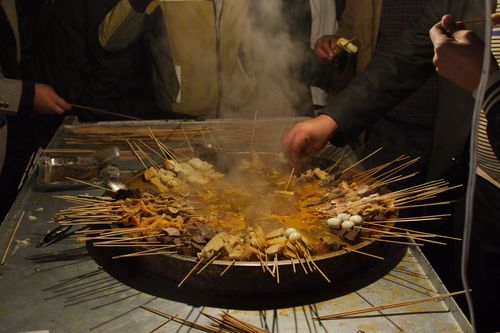 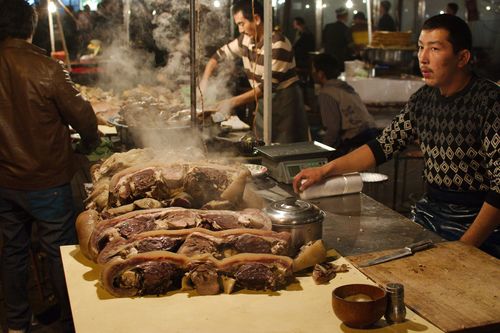 At the food market we also met Jonathan and Theo, who showed us their exiting video of cycling through Kyrgyzstan, which Jon had edited entirely on his iPhone:

Winter was close and time was pressing to move on to Pakistan soon. For 100$ we hired a van from the private bus stand in the southeast of the city to take us to the border town of Tashkurgan. In retrospective, it would have been nice to go by bike, but we felt stressed and didn't dare to spend another week on the road, fearing the pass to Pakistan could close any day. 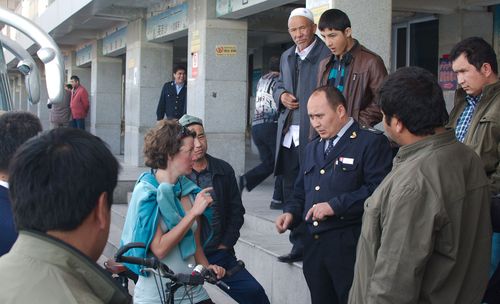 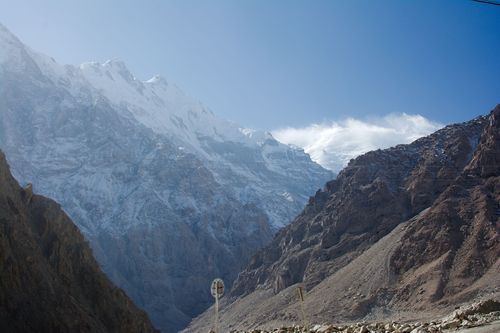 → www.flickr.com
On the road to Tashkurgan 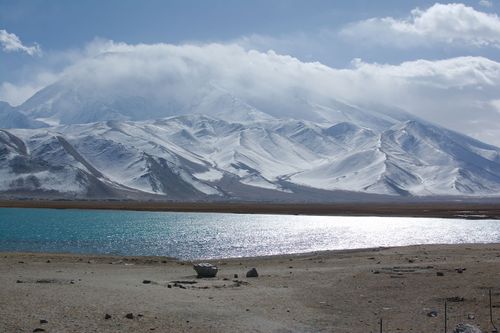 → www.flickr.com
Muztagh Ata at 7564m - we had glimpsed its peak from Murghab/Tajikistan a month ago

Cycling the chinese side of the Tashkurgan pass is not allowed, so taking the bus is obligatory.

In Tashkurgan we had a hard time finding the departure point of the bus though and went two times to the outskirts of the town and back to the bus station in the center. In the end the chinese customs building on the main road south of the center was the right place, an unsightly large building with a grey fassade and a big paved square in front of it. 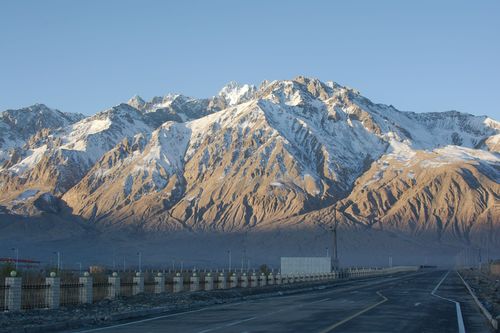 → www.flickr.com
The best part of getting up at 5am! 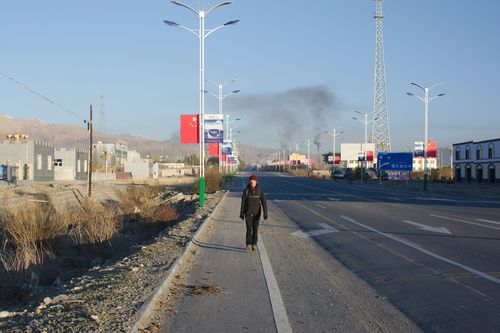 → www.flickr.com
Searching for the bus to Pakistan

Customs clearance was the dull experience expected from chinese bureaucracy, the officers replaced by androids seemingly devoid of human emotion. Behind the customs building, the pakistani bus convoi was waiting. We and a few dozen pakistani merchants stuffed our belongings into the compartments - with joyous shouts of "Chellu Chellu Pakistan" ("Go go to Pakistan") we finally set of south. 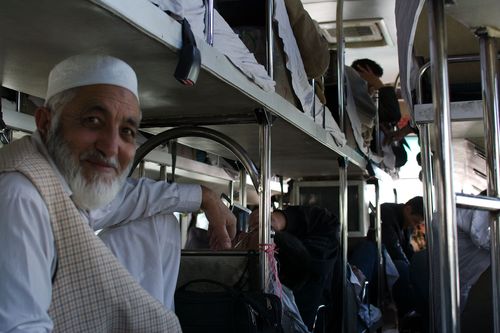 → www.flickr.com
On the sleeper bus to Pakistan