The long way to China 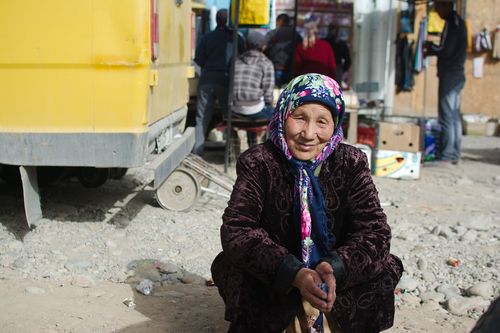 → www.flickr.com
Women at the market in At-Bashi
With our passports with the chinese and pakistan visa in our hands and a parcel with spare parts and replacements from Austria, dutifully sent to us by my brother and his wife, we where finally ready to leave Bishkek. 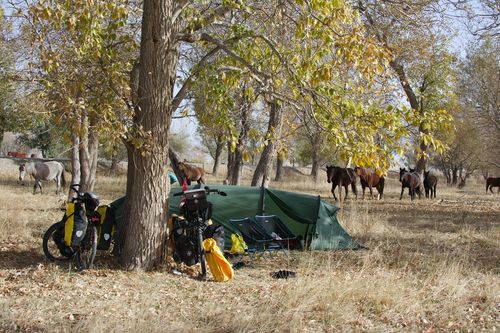 → www.flickr.com
Waking up next to a herd of horses

We had hired a taxi to Naryn and where already cycling happily over the first pass towards the chinese border at Torugard, when Talant, our host from Bishkek called.

We had started cycling on a Friday and where already looking forward to spend some days in Kashgar /China, gorging ourselves on chinese food and enjoying warmer temperatures, expecting to cycle over the weekend and to be there on Monday or Tuesday.

Talant's call however changed our plans gravely - he had just read on the news that the chinese had closed all borders for the following week! A chinese truck-driver we asked at a gas-station confirmed the unfortunate news.

Now we had to somehow manage to waste 10 days on meagre 120km of cycling! 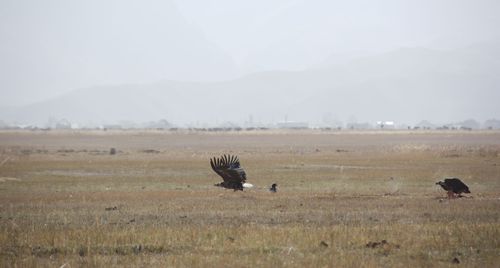 → www.flickr.com
Vultures feeding on a dead calf. There where a half dozen, but they set off when i got closer than 300m. 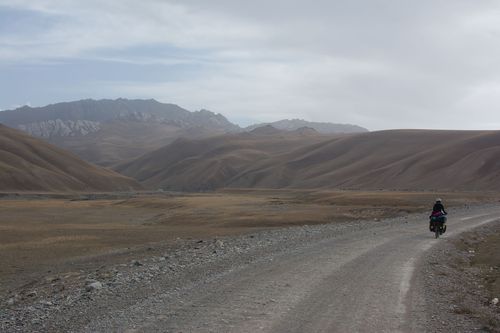 → www.flickr.com
On the road to Tash Rabat 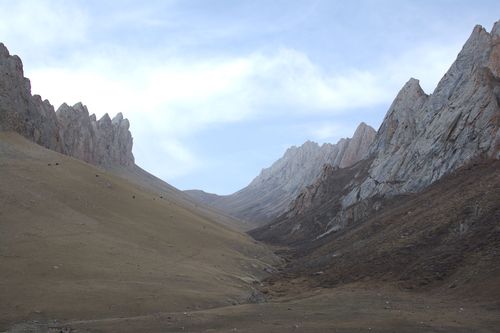 We ended up spending a day in the small town of At-Bashi and a detour to Tash Rabat, where we enjoyed another day-trip with horses. 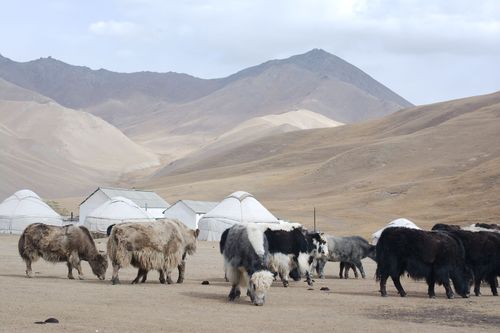 → www.flickr.com
A herd of Yaks at Tash Rabat 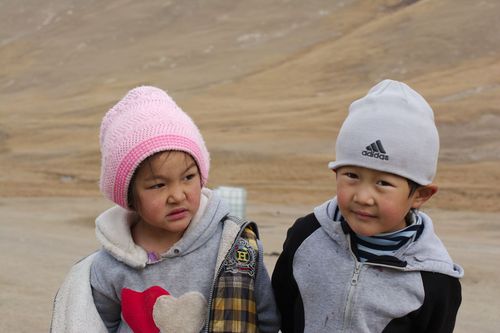 We where above 3000m again and as it was already late October the temperatures dropped below zero when the sun was not shining. The border region was also a sparsely populated place, so we relied on the few inhabitated houses for food on the way. 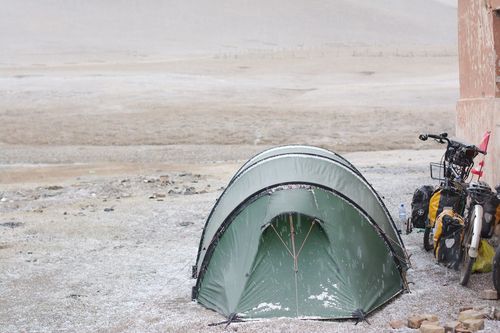 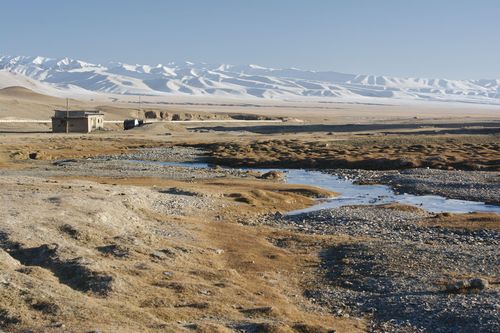 → www.flickr.com
...and the sunny morning after. 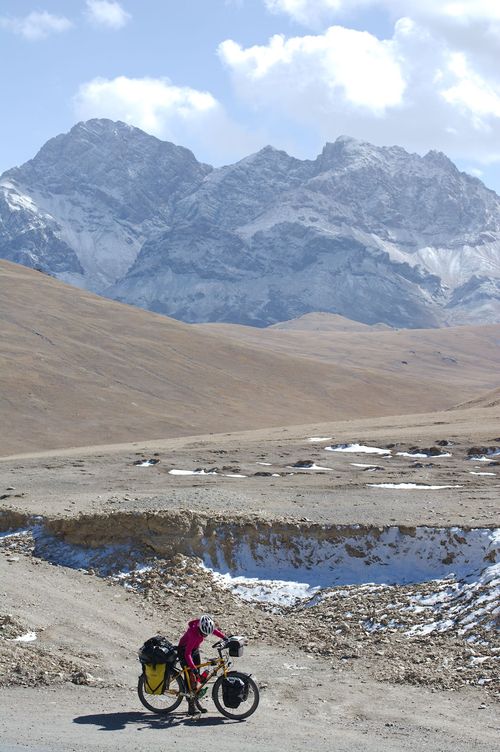 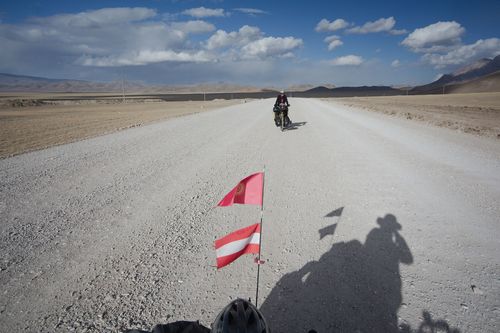 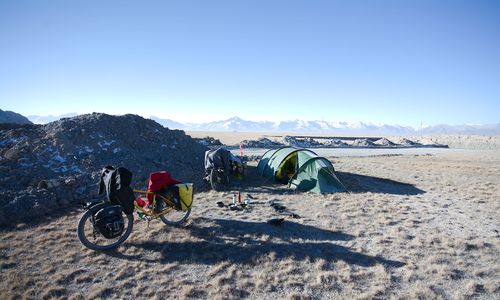 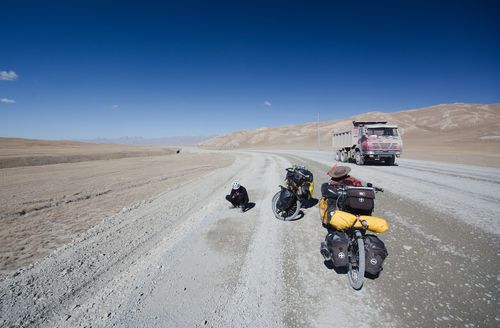 → www.flickr.com
Daniela resting next to the road near Torugard border 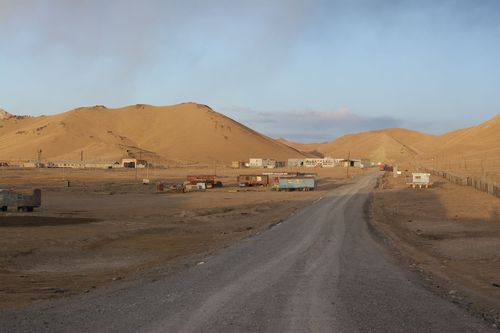 The place called "Torugard" at the kyrgyz border post is nothing but a bunch of waggons, set up at this remote corner to host truck drivers and the occasional tourist.

When we insisted to inquire a price for the night, the lady who rented the waggons just said "потом"(patom - meaning "later"). By then we already knew there was going to be trouble.

Sure enough, 2 days later when we set out to leave, she presented us with a bill of 4000 som, about 80 USD. Surely must have been a luxurious suite we spent the two nights in! 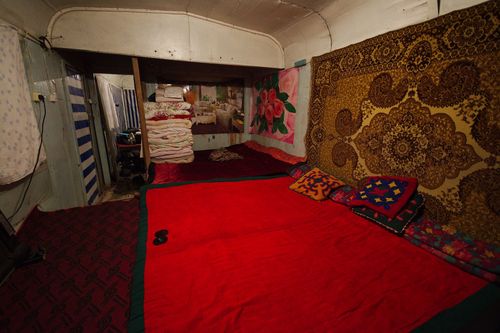 → www.flickr.com
Inside a sleeping waggon 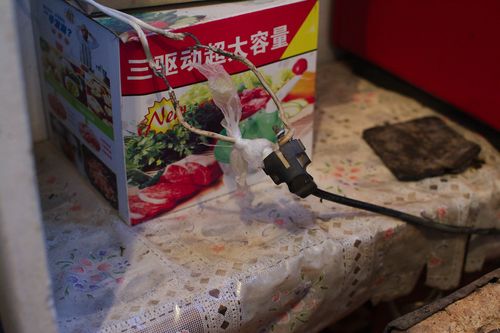 → www.flickr.com
Creative electrical wiring in the kitchen - the contacts fired blue sparks every other minute

However, the waggon was nothing but an underheated, windy shed which we shared with 2 smelly, noisy truck drivers.

As we had anticipated this to happen, we had already made our own calculation based on our experience with pricing in other similarly humble homestays and refused to pay more than 20 USD. In retribution, the lady took Daniela's handlebar bag and carried it in a backroom of her waggon. I of course followed her and took the handlebar-bag back. We ended up paying 30 USD and felt ripped of once again(But the comical situation with me grabbing the bag from that fierce, elderly kyrgyz woman will remain in my memory).

Little did we know that we would soon be in a rip-off-situation much worse than this one! 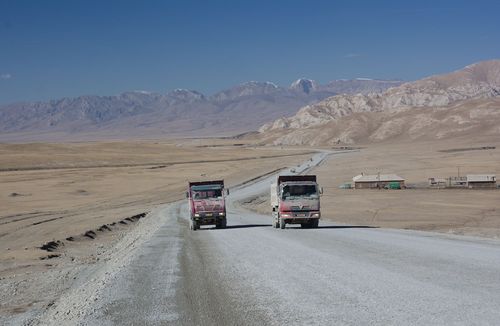 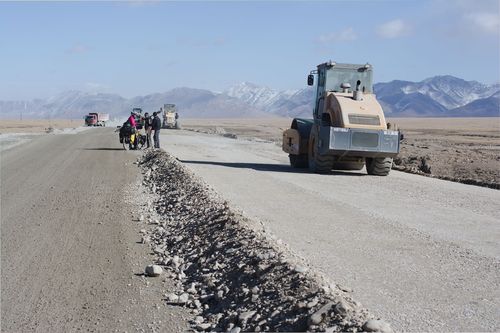 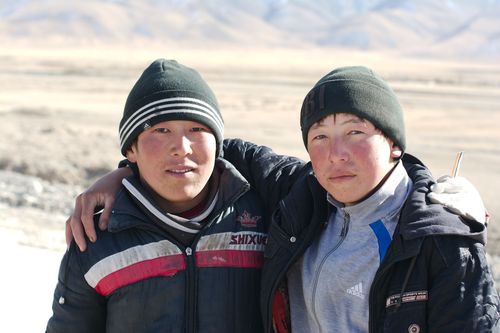 We knew the chinese would not allow us to cycle in the border region down to Kashgar. So we had planned to hitchhike on one of the many trucks going to China instead.

A long queue of trucks had lined up at the border in the morning - as we had planned, it was easy to find a kyrgyz truck driver who was happy to take us with him after we had cleared the kyrgyz border post. The remaining 7km to the chinese border post are very sandy and steep, we would have spent 2 hours pushing our bikes. 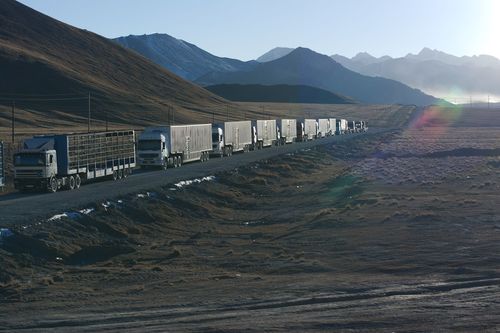 → www.flickr.com
Trucks queueing up at the kyrgyz border to China 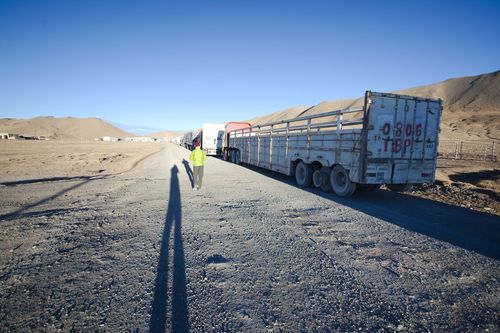 We had not reckoned with the chinese bureaucracy though. Not only do they close the border for weeks, they also forbid the truck drivers to take passengers over the border. So the friendly kyrgyz had to throw us out right in front of the chinese border gates.

We tried to plead with the chinese border guards to let us through with our bikes or let a truck driver take us. Not only did they refuse, making them understand our situation also proofed to be the first serious communcation problem on our travel - not even gesturing worked! Luckily one of the border guards had a translation software on his smartphone.

By this time, we had also met two australian couples who where waiting at the border with their 4x4. They had organized a tour guide to pick them up from the chinese side and it turned out this was obligatory, not only for motorized vehicles, but every foreigner who wanted to cross this border. The few licensed touring agencies use this to their advantage and charge outrageous prices.

One of the border guards had in the meanwhile contacted a english speaking tour guide in Kashgar. I talked with him and he confirmed that i would not be allowed to cross the border without a chinese agency. How much would they charge us for the 120km to Kashgar? 600 US-Dollars!

I was shocked and politely refused this crazy price and hung up. Now i started to get really nervous - we where stuck on this icy cold remote border at 3700m, we where not allowed traverse on our own, we had not enough food, getting to the other border crossing would take a dozen days by bike or another expensive taxi ride. It was already late in the year and we where afraid the border to Pakistan would be closed if there was snow. And we desperately wanted to get to Kashgar, back to civilization and a few days of rest, after we had already been delayed for so long. 600 Dollar! Nuts! 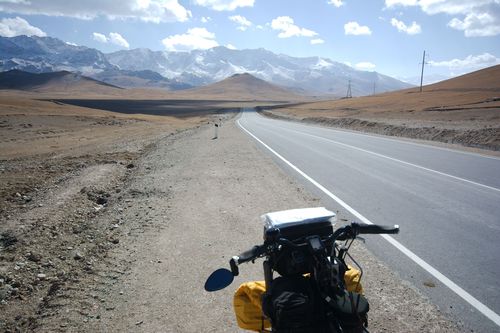 The Australians offered us to talk with their travel agency to arrange something with us. The lady from this travel agency told us that a bus was coming from Kashgar and the price was 400$. I told her i would have to think about it! 400 Dollar for 120km in a bus! Those chinese agencies sure where evil crooks!

So crossing this f-ing border would cost us a few hundred dollars - in addition to the chinese visa, which had already cost us 200$ each, as we had to send the passports home and pay the austrian visa agency for their service and for the delivery back to Bishkek. We where only traversing China to get to Pakistan! Crossing Afghanistan through the Whakan corridor would have been easier :-/

We had no choice - i called the second agency back and agreed we would take the bus. Soon after(We had been on the pass for 4 hours by then) the bus arrived and i confirmed with the english speaking tour guide we would pay 400$ for this ride, as we had no other choice. I was not happy and it felt unfair, but what could we do?

It turned the bus from China had been organized by 3 other cyclists, who arrived a few minutes after by taxi from the kyrgyz side. The police in Naryn had told them they where not allowed to go by bike to the border, so they had taken a car!

Another couple, backpackers from Brazil, joined us on the bus ride.

It was a smallish bus and we ended up stacking the 5 touring bicycles in the center aisle in between the seats, the trunk was full to the brim with our bags. 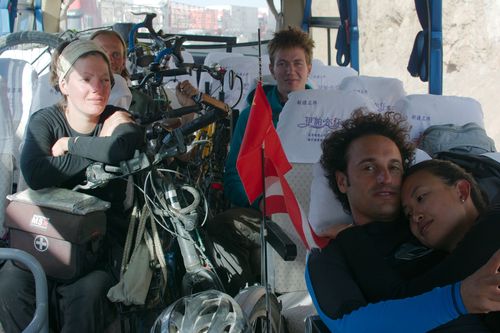 → www.flickr.com
On the bus to Kashgar

Later, after we had passed the outer and inner border post*, we discussed how much each of us had paid for the transfer.

*It was a regular border crossing without any bureaucratic paperwork, nothing that would have reflected the brazen charge for the transfer. On the phone we had been told that the price was for the "special permit" that was required and had to be applied specially for us.

I started to process this information and got angry. Why should we allow them to rip us off? So many times on this trip people had tried to take advantage of us, i was fed up! As experienced travellers we had most often been able to see through the game and fend the tricksters off or get a reasonable price - but it was exhausting! In this very situation at the border, we had had no choice at all! And those people clearly where frauds, they took advantage of the impossible situation!

We had agreed on the price with the agency, but not yet given them any money. I told Daniela i would renegotiate when we arrived in Kashgar and refuse to pay more than the other cyclists. 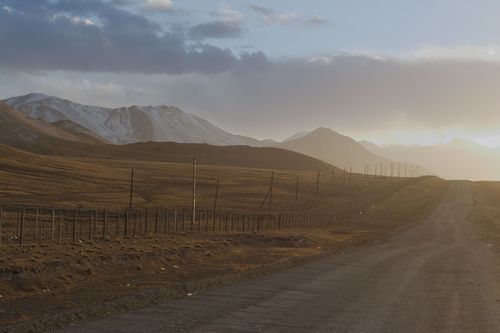 → www.flickr.com
Sunset at Torugard, border fence to the left

By the time we arrived in Kashgar, i had thought about the best strategy to approach this. Haggling is always a strategic game and i had learned my share of it in Central Asia. I would tell the guide i wouldn't pay more than 200$(Which was more than enough already), stand my ground and not budge.

The bus had stopped at the parking lot of a large hotel in the center of Kashgar, where we dropped off and started to unload our bikes and bags.

Unexpected, the guide exploded when i told him i wouldn't pay more than the other passengers. He completely lost it and started shouting at me - we had an agreement and i had broken it! I was a liar and a crook etcetera etcetera! I did my best to stay calm and asked him why he had to flip out, it was not his money after all.

He wanted none of it and said he would call the police - i told him to go on(Knowing he was bluffing, as involving the police would make matters much more complicated for him).

He took out his phone and started dialing, while i continued to load up my bicycle(Outside i faked a calm posture, but inside the adrenaline was rushing from the confrontation - i'm not used to fighting!). 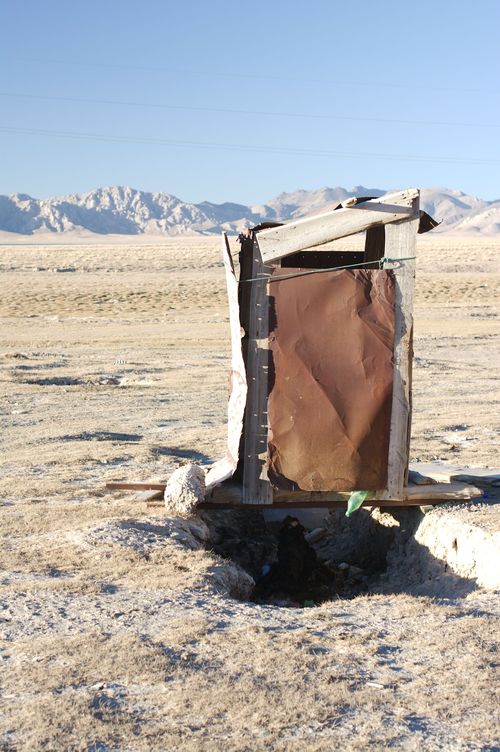 Of course he put away the phone after a minute of pretending - but by then he had realized he would not win this game by acting up. More calmly, he told me he was not in the position to renegotiate as he was only hired as a tour guide and to collect the money, i would have to talk with the agency about the price.

So i ended up going to the travel agency with the bus driver while Daniela stayed at the parking lot with our bikes and luggage. The guys at the travel agency where much calmer characters, they offered me to go down to 150$ pp. I was exhausted by then and after 10 more minutes of haggling(With the help of a translator) i gave in on the compromise. At least we had saved 100$.

When i left the agency's office it was dark, i only had a few coins of chinese money and tried to tell the taxi driver the name of the hotel where D. was waiting. Either my pronouncation was wrong or he didn't know the place, but  there was no way to tell him where i wanted to go. I had saved the name of the hotel in my cellphone - but then he couldn't read the latin letters!

I had no idea in which part of the city i was and i was starting to get anxious having left Daniela alone at the parking lot. To my relief i found a taxi driver who knew the hotel's name and the 5 Yuan where enough to pay for the ride.

After this nerve-stretching day, we where finally able to arrive in China and rolled our bikes into the old town of Kashgar in search for a place to stay.