The bad, the ugly(and some good) 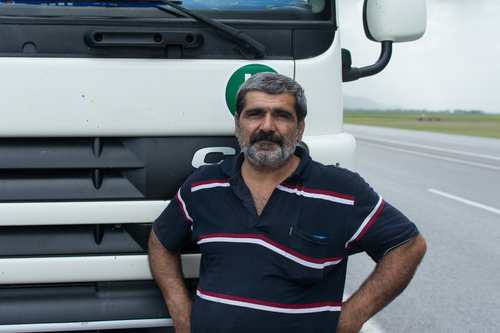 "Oh god, not another one of these guys"

A lorry had stopped a few hundred meters in front of us, the driver had jumped out of the cabin to wave us down. This had happened frequently in the last days and we where already tired of the ever repeating questions and invitations to çay.

Also we where quite hungry and where looking forward to the next roadside lokanta or kavurma. And we where definitely tired of yet another cold lunch of bread, cheese, tomatoes and cucumber, interrupted by flicking through our turkish dictionary to keep the conversation going.

Of course, the truck driver insisted on the çay and in his turkish babble i overheard "naan"(bread), "paneer(cheese) and "domates". All my polite refusals where rejected and we ended up giving in to the pushy invitation. 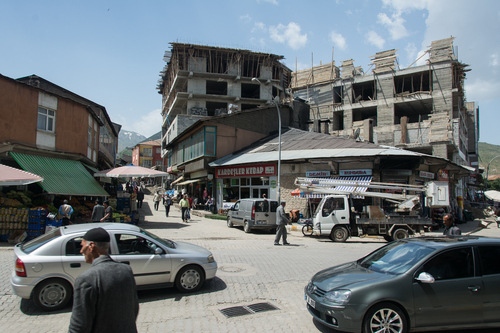 → www.flickr.com
Mus, yet another culmination of architecture in Turkey 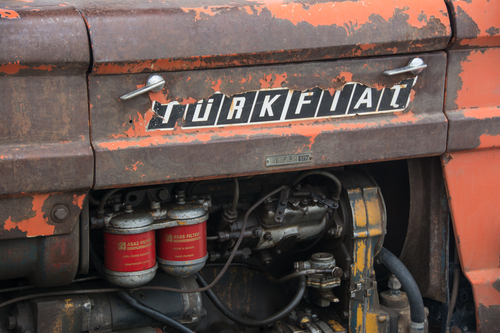 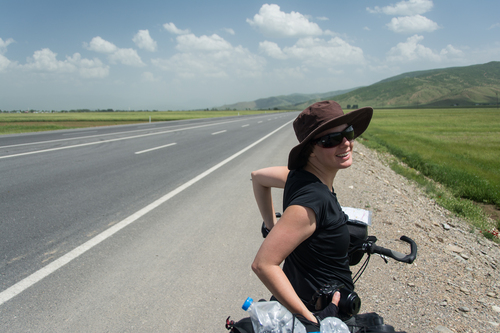 The very east of Turkey had a different face than the parts up to Malatya i had travelled in 2010. A lot more plastic bags and packaging material was littering the curb, the housing was  more modest and the people got a lot more annoying. Children where shouting "money, money, money" or "pare pare" as soon as they got wind of us.

When we stopped, crowds of young kids gathered within minutes and bombarded us with questions like "mynameis?" and "wheredoyoucomefrom?"(Turkish pupils have 1-3 years of english, they just seem to learn to memorize some phrases during this time). Or they continued blabbering in turkish, despite our repeated pleas that we don't understand. 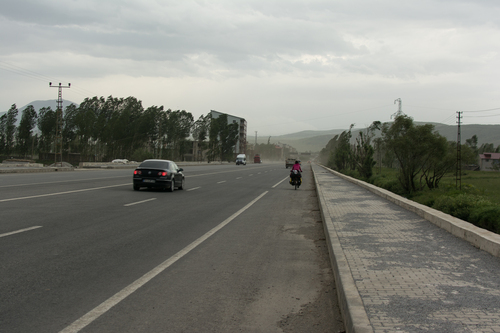 → www.flickr.com
Storm in the evening shortly before Guroymak 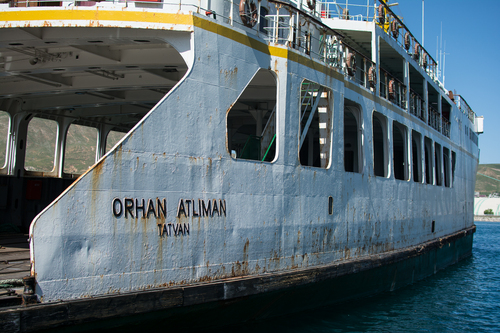 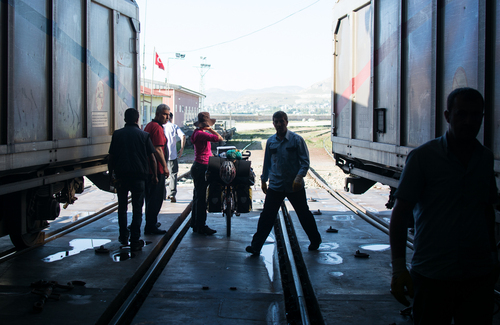 → www.flickr.com
Getting off the ferry in Van 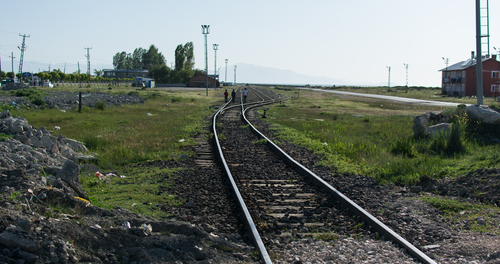 → www.flickr.com
Track to the ferry port

Van was the climax of dirt and lousy building standards. I don't know how the city looked before the 2011 earthquake, but what had remained respectively what had been rebuilt was the worst urban environment i've seen so far.

Houses looking like shoeboxes made of concrete, storefronts varying greatly in size, color and font(But all of them in bad style) and, as usual, streets built for cars, not pedestrians(Plenty of obstacles, stairs and open, unsecured manholes on the sidewalk). Lots of litter and dirt allover the town. 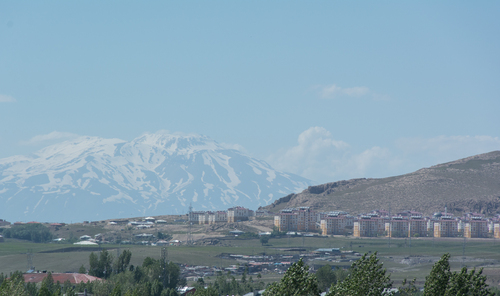 When we left the city, we passed by a large burning landfill which had no noticeable barrier against the groundwater. The foul smell of it's smoke trail was unbearable and i tried to cycle by as fast as possible. 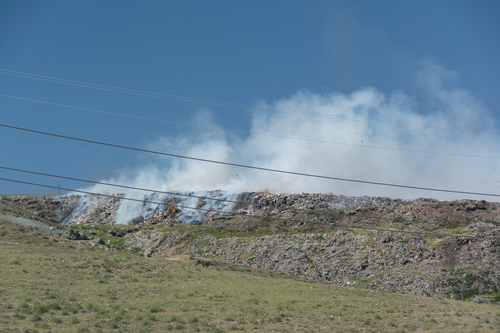 On our way from Muş to Van, we also saw refugee camps, tents bearing the logo of the red crescent - syrian families, fleeing from the civil war, who had found shelter in Turkey(But apparently not much more than that - a tent in the dirt next to a busy road). 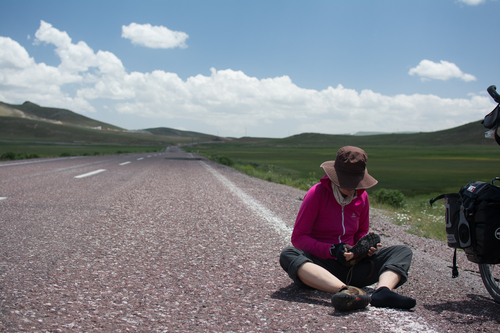 Our encounter with the lorry driver turned out to be a positively memorable one.

Instead of serving us bread, cheese and cucumber, Abdul showed us how to make Melemel(Mix fresh eggs, peeled tomatoes, onions and some cheese, add paprika powder, salt and pepper, cook until pasty).

He turned out to be quite knowledgeable and knew a lot about the world. Unfortunately his english was very limited and the conversation therefore a bit broken.

And as it turned out, there would not have been a restaurant or warm food to be found for the next 30km, so we where quite lucky we gave in to his persistent invitation. 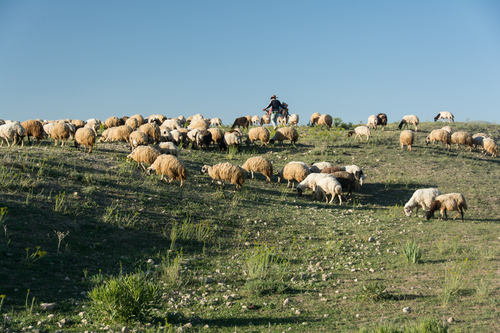 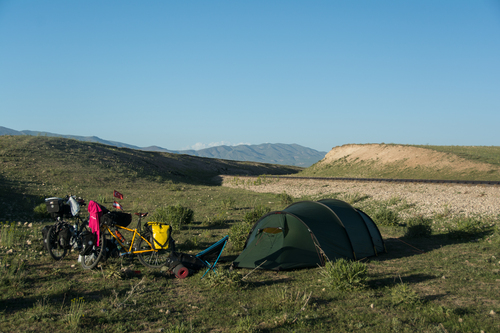 → www.flickr.com
Camping near Ercek Golu(Alkaline like Lake Van and full of algae - our evening shower was a slimy business) 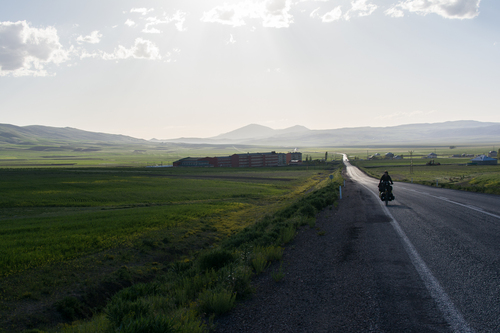 Turkey showed us a last glimpse of it's fantastic natural beauty on the last two days to Iran. We went on an elevated plane through calm, green pastures up to the border, in the evening the landscape was immersed in the yellow light of the setting sun.

The border procedure took quite some time - when we arrived, there was no queue, when we left, some 30 people where waiting behind us.

The police officer had scrutinized our visa and made several calls to Tehran to verify their validity. Not having found any flaws he seemed unsatisfied and gave us the passports back with a stern gaze and the harshly uttered words "Go to Iran." 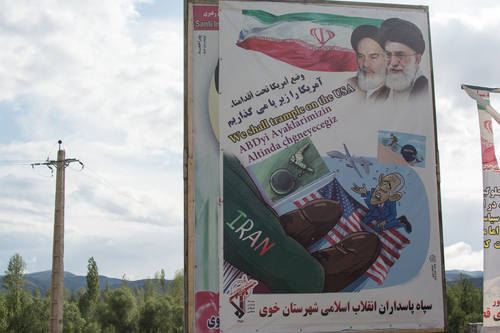 → www.flickr.com
The first propaganda posters shortly after arriving in Iran 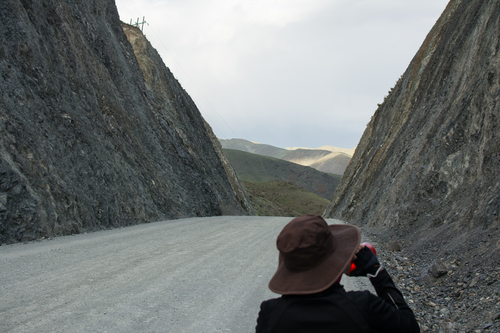