"Haha, 90% probability of rain - the weather report was pretty much bullshit, wasn't it?"

The evening before we had left the Kavurma(A roadside eatery, named after the namesake dish they serve) in a rush, as a storm was looming and the first raindrops had started to fall. By pure luck we had found a pretty perfect camping spot shortly after - a flat piece of short grass between apricot trees - quiet and secluded. We managed to setup the tent just in time before the rain started pouring. Nothing is more cosy than lying in a warm sleeping bag in a tent when it's raining cats and dogs and there's a howling wind outside(Given you know what your tent is worth). 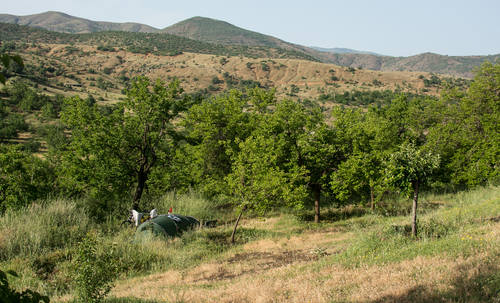 The next day was as sunny and nice as can be, a cloudless blue sky allover. According to the weather report we had checked online at night, it should have been heavy rainfalls.

Alas - two hours later - we had just finished packing up - we had to rush to put on our raingear - the weather had turned and another wave of heavy wind and pouring rain had catched up. 90% probability of rain - quite right, against all odds. We where waiting out the worst under an apricot tree before we started, Daniela couldn't find the raincovers for her shoes and was swearing under her breath about her wet socks. 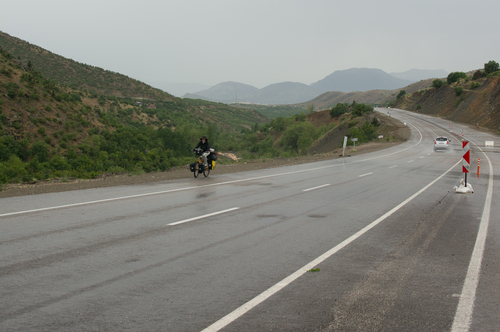 Another 4 hours later we where sweating uphill under a clear sky - we had taken the first chance to leave the heavily trafficed D300. However, for some tranquillity we also had a very steep climb of 400m up to the village of Gözeli. The following night brought freezing temperatures around 10°C, Merino long johns and a longsleeve buried in the last corner of my bags found some use. 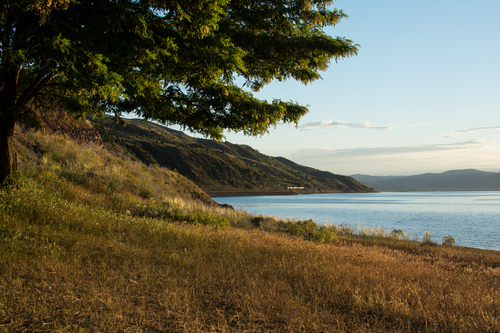 Hazar Gölü(Lake Hazar) was a welcome spot to take a day off from cycling after the first four days. The beauty of the place was only tarnished by all the rubbish thoughtlessly left by turkish families after taking a picnic under the trees at the shore of the lake. 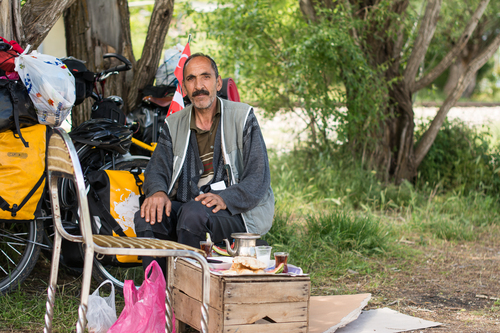 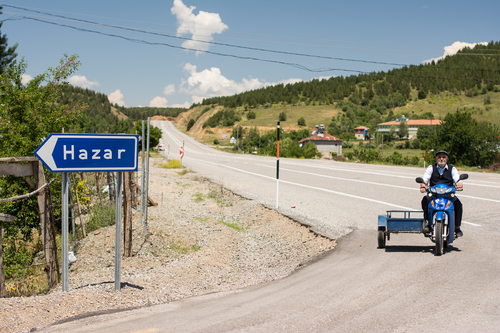 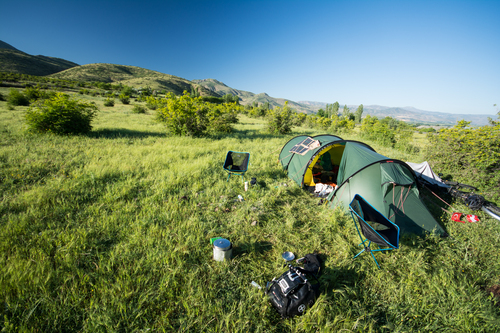 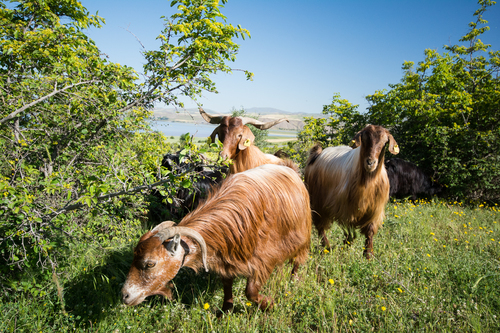 → www.flickr.com
In the early morning we where surrounded by a large herd of goats 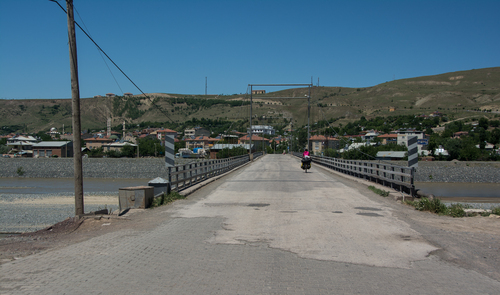 We entered Palu with empty stomaches and the naive faith that it would be just another stop on our continuous line we had plotted through the mountain-ranges. Our target for the day was Beyhan, from where we would continue for 2 days on a secluded mountain road to Genç.

After a very stressful stop at Palu's main square(Lots of pesky young boys surrounding our bikes while we where eating and getting groceries), we headed out for the 30km to Beyhan. 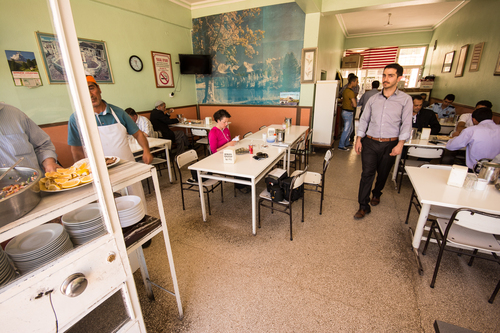 Going flat along the river Murat for the first 20km we where passed by dozens of mini-busses("Taksi") and Trucks who greeted us friendly by honking, some of them stopped to ask us where we go(Beyhan and Genç!) and if we need help and to give us cookies. There where also a peculiar(!) amount of pickup-trucks(Mostly expensive Toyota Hilux). 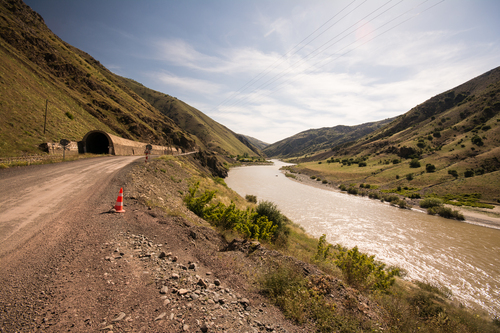 The last 10km to Beyhan consisted of a very very though and long climb in blazing afternoon heat. On the last 1km before Beyhan yet another lorry stopped to ask where we where headed. 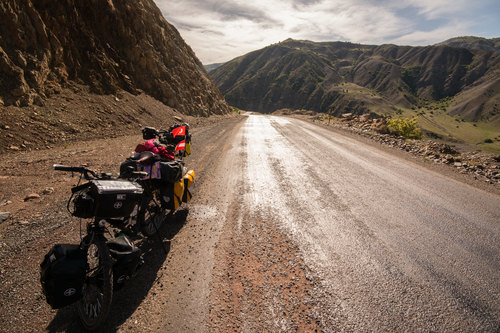 → www.flickr.com
We where already soaked in sweat at this point, but it was just the start of a long uphill battle

I told him what i had told everyone else - we where planning to go sleep near Beyhan and to continue to Genç the next morning. This time however, the answer from the driver was not what i expected - his english was not very good, but he made clear that the road to Genç was closed - there was a big construction going down, apparantly some huge dam-project.

There was no way we would be able to go to Genç via Beyhan - the driver was very nice and he even called the engineer responsible for the section, who confirmed they where working on excavation of the surrounding mountains and the road to Genç was blocked respectively destroyed. Duh! Suprising news! That was also the reason for the unusual high number of expensive pickup-trucks - employees of the company building the dam, visiting the construction-site. 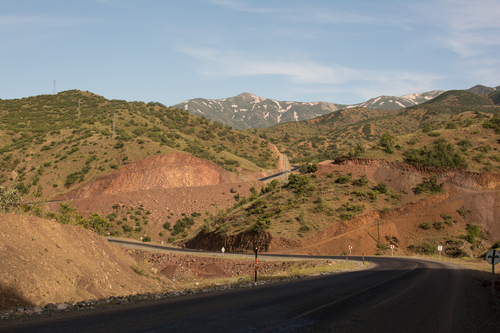 → www.flickr.com
Note the snow on the mountaintops

What where we going to do at five in the afternoon, after an exhausting 30km ride? There was no way we would be going back to Palu the same day. We thanked the driver for the important information and continued on our way up the last ascend before Beyhan. Another pickup-truck stopped, the driver repeating the bad news. A young villager on a scooter approached us too, inviting us to his home. In broken english he explained there where dangerous bears and wolves in the area and sleeping in a cadir(tent) would be far too dangerous. He appeared a bit crazy in his appearance and the silly stories he told - so we where happy when yet another man took care of us.

Ekrem, a calm taxi driver invited us to his home, where his wife took care of our empty stomaches(Great Melemel/Menemen again). 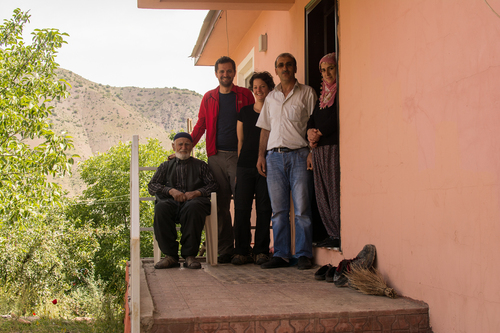 → www.flickr.com
Ekrem and his family who hosted us in their sweet home for a night

Communication was difficult, but we still managed to exchange some information. We even found out he had passed by 5 times with his bus this day, going back and forth along the road we where slowly struggling along. We all shared a good laugh about the fact that everyone knew the road was closed, but nobody had told us :-)

Back to Palu the next day was a lazy venture - we shared a tea with two lonely soldiers in their mountaintop checkpoint and chatted for quite some time in german with a turk who had lived in Germany for many years and who had come back to his hometown as the living and work conditions where better in Turkey. 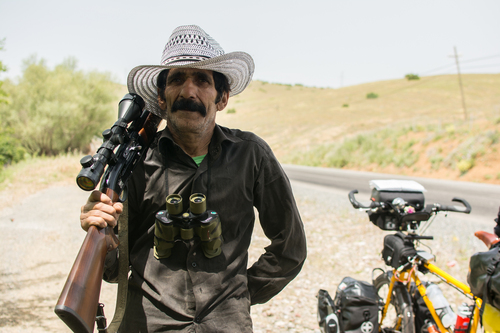 → www.flickr.com
This handsome guy is a hunter, he confirmed there are bears in the mountains around Beyhan 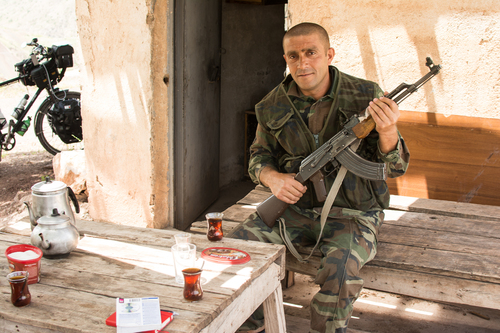 → www.flickr.com
Two soldiers who commanded a desolate checkpoint invited us to Cay and chat 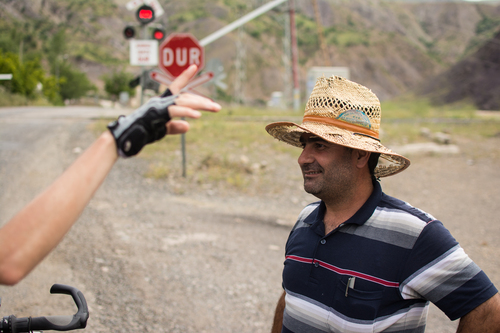 → www.flickr.com
Chatty guy who had live in Germany for many years and returned back to Turkey.

We had planned to spend the night in our tent near the town - but the security guard of a nearby power plant invited us to sleep in his small guardshouse(He warned us that the youth of Palu was growing and consuming dangerous marijuana plants where we had chosen to spend the night, and we where more safe in the power plant compound).

There is a train connection from Palu to Muş via Genç - as the final entry date for our Iran-visa was looming ahead we took the plunge and zipped of 170km by train in a mere 6 hours. 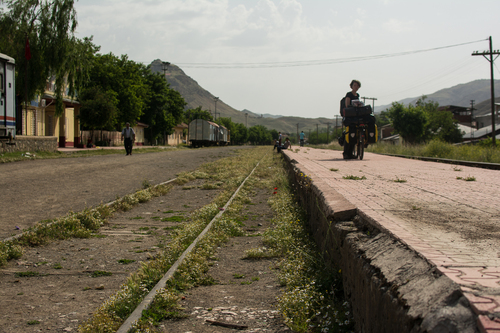 → www.flickr.com
Waiting for our train in Palu 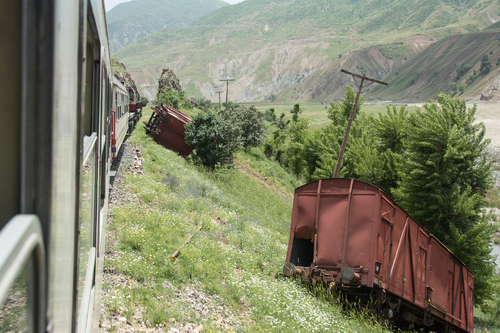 → www.flickr.com
A man on the train told us these waggons had been bombed by the PKK. In fact, a lot of the people we met talked about PKK attacks and there where a lot of heavily armed Jandarma(Police) checkpoints in the area.