"Where did i put the damn tyre levers?" - I had checked both front panniers, which are more "accessible" than the back pannier, the one bag where i've stashed my tools, spare parts, electronics and maps - stuff that i rarely take out, so this is the bag that remains mostly untouched but is the fullest and heaviest.

I have two sets of tyre levers and i knew i had put one set in the front pannier to have it easily available in an emergency case like this, but now i can't find it.

The second set is at the bottom of the aforementioned rear pannier and i want to avoid putting out it's delicate content(Books, electronics) and dig deep into the bottom of this bag just to get this stupid tool. 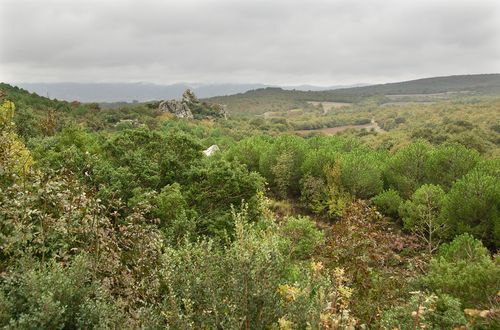 → www.flickr.com
Using a short window in between rainfalls to take a snapshot

The day before i had thought to myself: "Wow, i rode nearly 2500km and i didn't have a single puncture - and i don't even have puncture proof tyres!" Oh, the irony!

I'm on the D010/D020, the not so heavily trafficked 2-lane-street i've been following since Kırklareli has turned into a refurbished and widened 4-lane motorway and now feels just like any "Autobahn" in german speaking countries.

15 Minutes ago my back tyre has exploded. I've unloaded the bike, removed the back wheel, inspected it and found that the tyre had been riped open close to the rim, which in effect had caused the tube to grind against it and eventually it exploded due to the high pressure(The tube-leakage was sudden, but the tyre-rip was caused by wear over the 2300km i've used it with heavy load). Usually, such a failure wouldn't be a big drama as i carry all the spare parts, including a foldable spare tyre, and replacing it would not take more than an hour.

However, i was in an very uncomfortable and exposed location on the thin breakdown lane of a motorway, with big quarry trucks rushing by every 20 seconds, it had been raining cats and dogs throughout the afternoon, i was soaking wet and eventually started to feel cold, it had just started to get dark, the bike was covered with wet sand from a stretch of muddy road where the D020 was still a building site and i was looking for that pathetic plastic-tool to finalize putting up the replacement tyre and tube. When i just started to dig out the contents of the back pannier to get the tyre levers, a big top-loader truck slowed down and reversed back to my position. 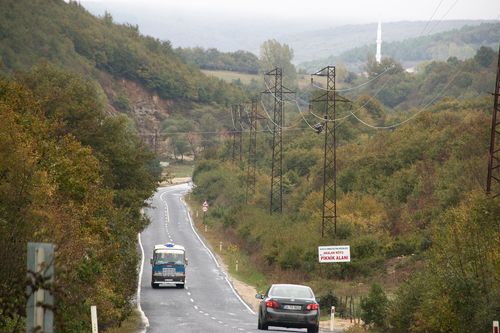 The driver jumped out, blurted some turkish i didn't understand and made clear that he was going to pick me up by opening the hatches of the loading platform. I hesitated for a second due to my dogma of "doing it all alone on my bike" but i was feeling miserable enough to tell myself "just f that" and we put bags, bike and wheel on the back of the truck.

The lorry driver left the road after a 20min ride at the city border and stopped at a tyre/vulcanization workshop, obviously he had assumed i would need this service. I successfully made clear to the shop-owner that he couldn't help me but i was still happy with this solution, as the workshop provided a warm and calm place to fix the problem. It still took me a full hour to replace the wheel and remount it as there was so much sand and dirt in between close-fitting parts of the drivetrain and brakes and i had to remount it several times till it worked.

The next obstacle was to get through the traffic jam from my remote location at the city border to my host Jeff in the center of Şişly/Taksim in the dark night - however, i felt amazingly enabled and encouraged after my previous adventure and with the help of the N900 i got as a farewell present from my friends at metalab it was easy to find my way through eery Hochhausschluchten of the development areas, the chaotic and thick motor-traffic and across the hills of Istanbul into the heart of Şişly, where a warm shower and a heated, modern flat where waiting.