Since i was not able to finish my travel- report of our Morocco-trip in the last few months i'll cut it short and just upload the photos and the GPS-data. Unfortunately for some reason the GPS-tracker failed on 25th and 26th and i only have saved an empty trackfile(Which i didn't realize back then). 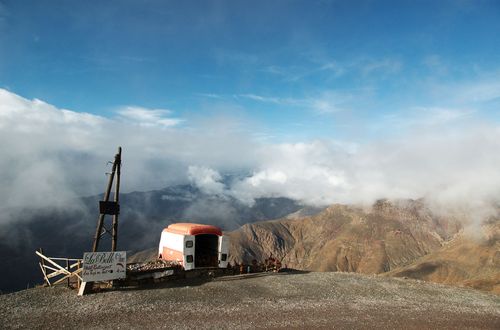 → www.flickr.com
On the 26th we went downhill from Tizi-n-Test and since i was still very weak we decided we have to give up our initial plan to cycle through the Anti-Atlas and instead to go to the coast to enjoy at least a few days of relaxed holiday at the beach(Well, it was not relaxing in the end). In Taro udant we met Racheev, a crazy and lonely belgique-marocaine houseowner who approached us at the only bar that serves beer in Taroudant, which was located in our hotel(Which translates to dozens of drunken marocaine alcoholics in the foyer!). 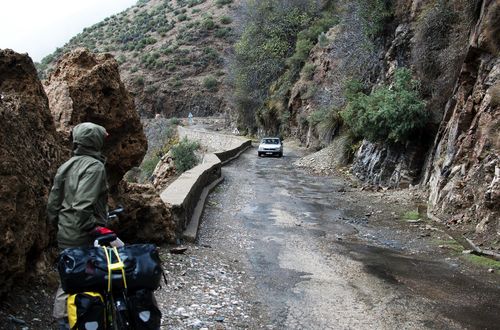 → www.flickr.com
Winter 2009/2010 brought record floodings to Morocco(The heaviest rains in 20 years according to older people we had talked with) and the coastal road in the Sous Valley was closed for a few days, luckily it reopened when we left Taroudant the next day to go to Inezg ane. 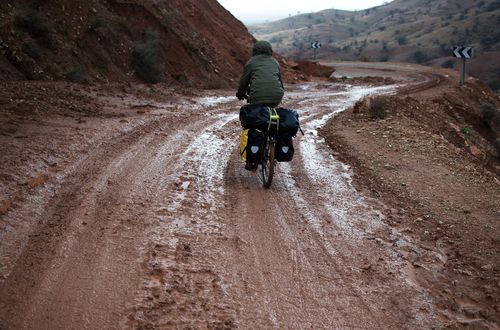 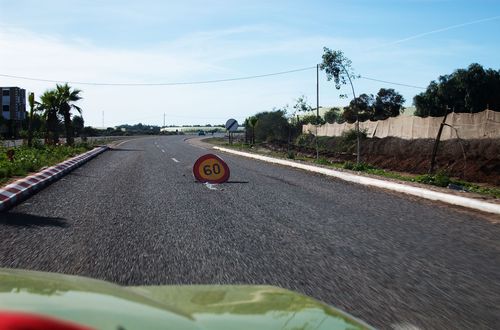 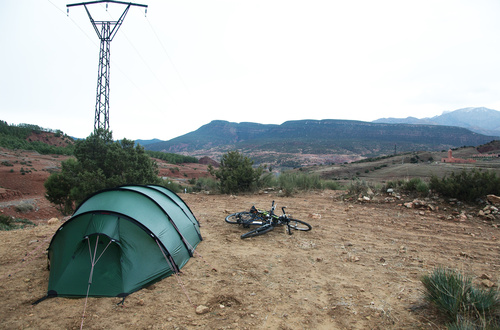 → www.flickr.com
After a rough night...
At noon we had finally packed up and got back on the road in full rain-gear as the weather was still changeable.
Riding with a grey sky is always a dull experience and the brown landscape didn't offer too many sights, beeing also pretty grumpy didn't help either. But after few kilometers my temper settled and i strived to be a bearable travel-companion for Daniela.

→ www.flickr.com
Not much curios happened as long as there was daylight, it was already getting dark and we couldn't find any good place to stay(No villages or flat land for some 30km) so we had to struggle to reach Ijoukak, the next bigger village on the map.It's always thrilling to not know where to stay when traveling in the evening, especially when you are on a bike on a narrow street in a mountain valley, a steep rise to the left and a deep canyon with a high tide river to right.
It had rained a lot in the days before and this had left stones and mud on the street, though not so much to cause any serious trouble. The expectation to finally see the goal after the next turn drove us forward. Many turns later there was still no sight of the village-lights. It was already pitch black night when we approached a fast flowing stream, running right across the street.
After a short examination it was clear that it would be rather difficult and possibly dangerous to cross it with the heavy bikes. We where standing there for a few minutes, elaborating how to cross, when a excavator that had been moving rubble a few hundred meters on the other side turned its glaring headlights towards us and approached us. 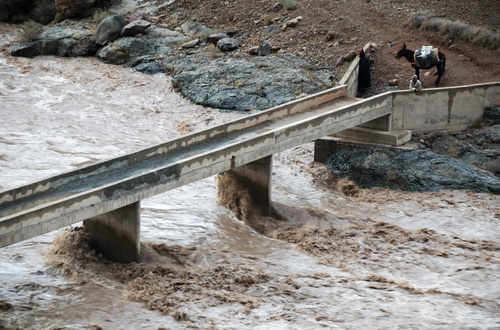 → www.flickr.com
It crossed the stream, stopped 2 meters in front of us and moved it's hydraulic arm to ground level - obviously an invitation to help us with the crossing. I lifted my bike into the shovel and jumped in myself. A roar from the diesel motor turned the shovel upwards, the vehicle started to move and a minute later i was safely dropped on the other side of the creek. The kind operator of the heavy machine repeated this procedure with Daniela and her bike and we where able to continue our ride with dry feet within minutes. 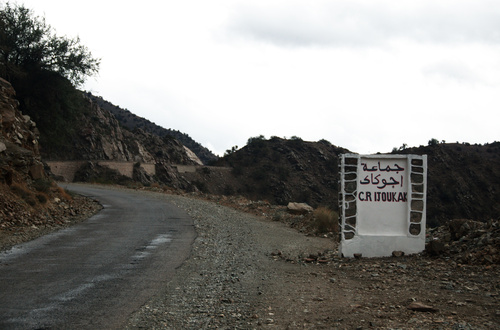 → www.flickr.com
We thought we where close, but this sign only indicated the district border with 2 hours to go to the village of Ijoukak
After another dozen kilometers we finally reached Ijoukak where we where lead to Amad, the owner of a guest room and a small cafe. The guest room was furnished with a typical arabian sofa - rows of padded stools along the walls, with tea-tables in the middle. Since our start in Marrakech the temperature had dropped and was in the low 10s, so it was rather cold and the room had no heater(Which we didn't expect). But there was a hot shower(Which later turned out to be a thinly dripping joke of a shower - still it was hot) and we where delighted after two straining days on the road, at least a proper, dry stay and the opportunity to wash ourselves. It was Christmas eve.
I had already been pretty weak in the afternoon and when i was trembling after the shower it was clear i had catched a cold. We went downstairs to have supper but i soon realized that it had hit me a lot harder than expected. I was freezing and just wanted to lay down, so after having just eaten a few bites of the glibbery egg omlette i went back upstears to slip into my sleeping bag, Daniela covered me with a thick layer of several wool blankets, my teeth where chattering and i was breaking out in cold sweat.
Amad, our hospitable host was concerned, asked how i felt and later brought us a clay jug filled with glowing and sizzling charcoal that offered at least a bit of warmth. That's the last picture i remember from the evening as i soon passed away into disturbing, feverish dreams.
Judging by Danielas travel journal, it must have been a pretty bad evening for her. Her boyfriend and travelparnter passed out in a unsettling rash of fever, spending the christmas eve lonely in a cold, spartan room in a little village in the midst of the Atlas Mountains, her thoughts on happier Christmas eves she had spend with her extended family in a warm room around a green tree and the smell of gingerbread and candles.
December 23, 2009 Tahannout, Marrakech, Morocco

We finally started travelling by bike towards the Atlas Mountains, it took a while to leave the flat surroundings of Marrakech and reach Tahannaout at the foots of the mountains, but we where rewarded with one of the best Tajine of the whole journey. 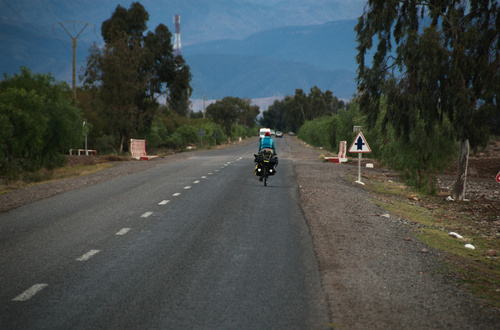 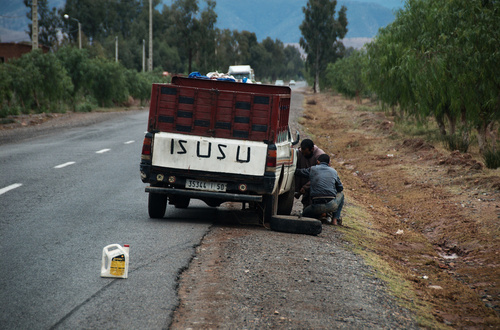 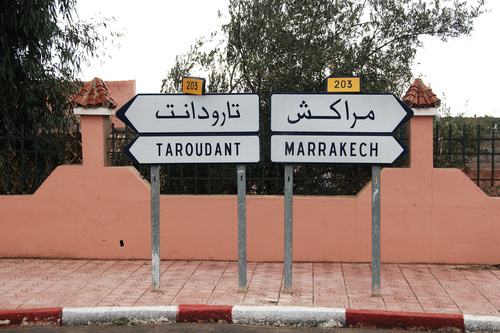 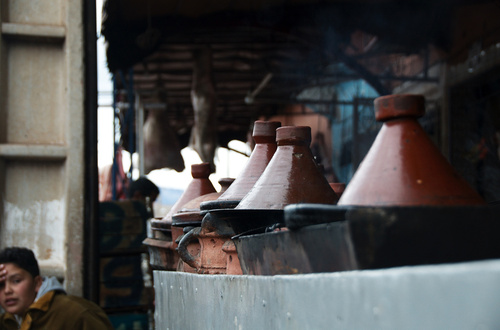 → www.flickr.com
After Tahannaout the road got steeper and we entered the gorge leading to Tizi-n-Test. Weather was not on our side and the white-greyish sky neither lifted our minds nor provided good light for photography.
It was already close to dawn when we approached Asni, we had already been looking for a place to pitch our tent along the road but we still needed to buy food. There was a local vegetable/farmers market and we took the opportunity to buy a bunch of huge carots, potatoes and onions for a mere 70 (Euro-)Cent. We declined the live chicken however.
Unfortunately we also had to fight of two annoying guys who desperately wanted to sell us their "beautiful" silver jewelry, presenting it with sparking eyes as if the bracelets where right out of Ali Babas cave, expecting us to be all ecstatic about the fine and "no where else to be found" treasure they where offering us. 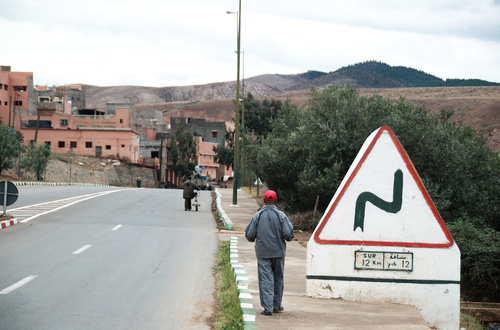 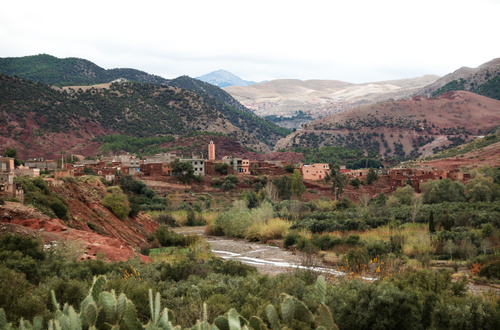 → www.flickr.com
Shortly after Asni we left the main road and went a few hundred meteres up a dirt-road which promised a secluded and quiet ground for our tent, which we eventually found. Later at night it turned out not to be the most protected place unfortunately.
We went to sleep early at around 9pm as we wanted to get up at dawn to profit as much as possible of the short daylight. It had begun to rain which i like very much at night, it feels cuddly and assuring to me.
After barely having fallen asleep, the rain stopped and a strong wind started to blow. The noise kept us wide awake and the wind turned into a storm, forcing me to go outside regularly to check if the pegs where still anchored safely to the muddy ground. The immense noise, frustration of not beeing able to sleep and the fear of a tent going airborne provided for the scariest and worst outdoor-night i had so far.
Very late, at around 5 o'clock, the night had already turned into the dark-grey morning-mush, the weather gods finally had mercy on us and we where allowed to get some sleep, but the idea of a full nights rest and an early start where gone with the wind.
j ↓h ←← newer 68 ... 11 10 9 8 7 6 5 4 3 ... 1 older →k ↑l →