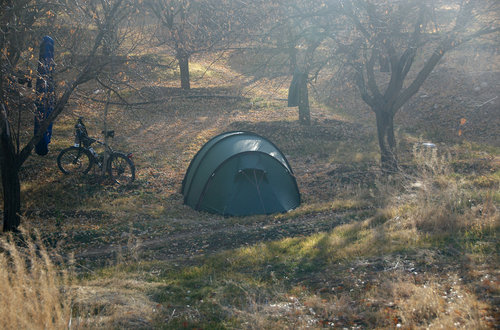 → www.flickr.com
Last camp in an apricot orchard - Malatya produces 65-80% of the world dried apricots - i was going through some 30km of apricot orchards on my way to the city

With only 40km to go, i arrived in Malatya in the early afternoon. Via couchsurfing.com i had contacted a couple in Yesilyurt, a village close to Malatya and was welcomed by Zehra and Ilyas in their spacious flat with a hot shower and some fantastic turkish food. Despite my protests they had sacrificed their bed for my stay. I had strong doubts if it really was what they wanted and not just excessive politeness and hospitality, but eventually they convinced me that they actually preferred to sleep on the floor of the room with the only oven in the house, no matter if they had guests or not. Fine with me, as i prefer to sleep cool. 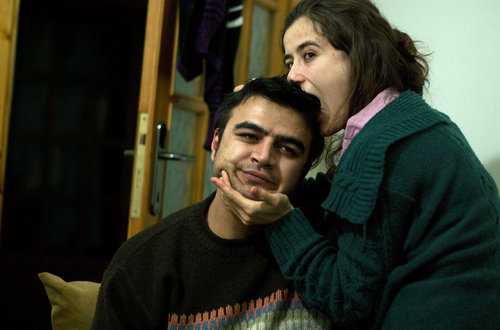 → www.flickr.com
My hosts Zehra and Ilyas fooling around - unfortunately the light condition was pretty crappy

Turkish cities have huge infrastructure issues and Malatya is not an exception - the main mean of transport is the car and the traffic is very uncivilized - pedestrians are nothing in this maelstrom of motor powered vehicles - you always have to run when crossing the street and drivers don't bother to slow down or stop, they are dominating and foot traffic doesn't even attempt to change this pattern through protesting or civil disobedience(I was close to slam my fist on car bodies, who threatened my bodily integrity, a few times but refrained from doing so to avoid embarassing my hosts, who accompanied me). There's constant noise from honking cars and the drivers also don't realize how inefficient their accelerate-and-break riding style is. The huge amount of cars and the dominant source of residential heating - which is coal - provided for heavy smog throughout the city.

The bad air and our main mean of transport - a bumpy 10 minute stop-and-go minibus-ride from Yesilyurt to the center - made me feel pretty sick and left me with a headache after every visit to the city. It is surprising that the local government doesn't seem to bother about public transport - it is handled solely by private businesses with Mercedes Sprinter buses. At the same time, the city is growing massively and big areas consist of newly built, cheap residential buildings(Similar to the ones i've seen outside of Ankara). Clean public transport could easily be achieved with a few well planned tramways, but i guess this is beyond the scope of local governments around here. 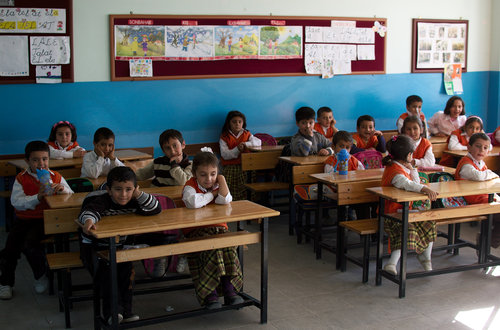 → www.flickr.com
Presenting my journey to these students was truly a highlight
Zehra and Ilyas where incredibly caring hosts and they attended to me as if i where their center of life during my stay. Both are liberal intellectuals and right on the first evening they confessed me their belief in the cult of the flying spaghetti monster.

Ilyas is an elementary school teacher in Yesilyurt and during our discussions the idea to teach his pupils about my journey came up. On the last day of my stay in Malatya i joined him for his afternoon courses and talked for 2 hours to his students and showed them my pictures - which was an unique experience and the students asked some pretty clever questions :-)

After two bus-rides in Malatya with my hosts i'm really glad i chose the bike as my vehicle through turkey. I still feel sick. 38.067, 38.017

A last wall of mountains 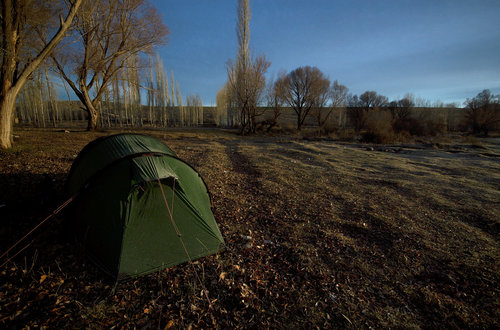 → www.flickr.com
The morning was very frosty as i had camped in a small, shadowy valley next to a river.

I had planned to fight today to reach Malatya, but with 90km to go and a mountain pass in between it was going to be though. 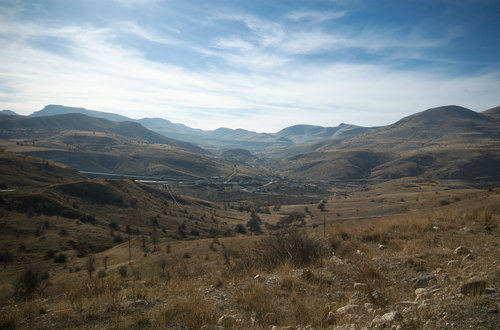 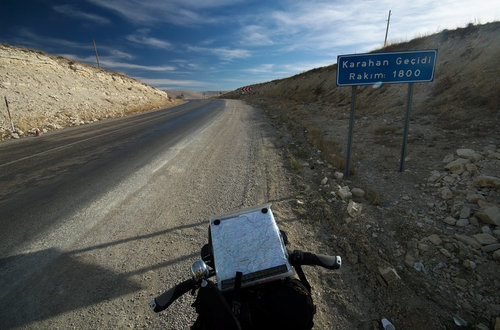 → www.flickr.com
The last Gecidi for a while
After the mountain pass turned out to be two long ascends and still 40km to go in the late afternoon, i realized i would not make it to Malatya today and pitched my tent in an apricot orchard for a final night on the road. 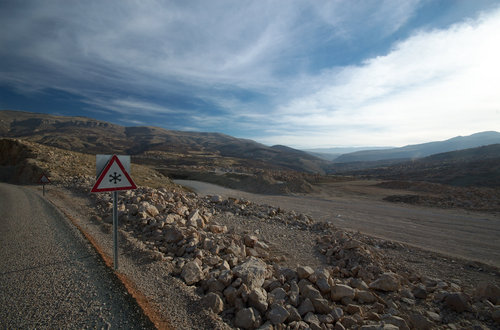